A Beginner’s Guide to Social Media in China 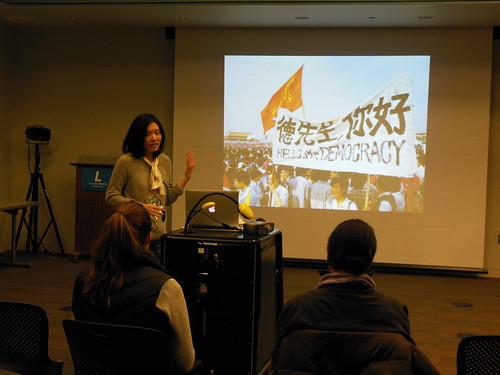 What was the take-home message of the class?
In societies where people are not free to speak their minds and can be arrested for mentioning unflattering historical events, they tend to develop a unique sense of humor as a coping mechanism. (I remember this from my parent’s stories of living under Eastern European communist regimes.) Lai told us a handful of crazy Chinese stories (one even featuring Christian Bale!) that sparked numerous memes and secret code words across China’s biggest social media sites, especially Weibo, China’s most popular Twitter-style site.

One example is the 2010 Li Gang case, in which the son of Li Gang, a deputy police chief, struck two university students with his car, fatally wounding one of them, and drove away. When he was stopped, he drunkenly stumbled from his car, saying they couldn’t arrest him because “my father is Li Gang.” People were upset, but they couldn’t say anything directly, so they started creating dog memes, bumper stickers, and new renditions of classic Chinese paintings with “My Father Is Li Gang” written on them. Take that, censorship! (See also this New York Times article on the incident.)

What was the most surprising thing you learned?
The Chinese government has largely censored the entire year 1989, because of Tiananmen Square, so if you type “1989” or “89” or even “8/9” into a Chinese search engine, results are always censored — or “harmonized,” as the Chinese government likes to call it.

What did you learn that you can put into practice immediately?
Be thankful for freedom of speech.

Where can I find more information?
Take a trip to China and try using the Internet! If you don’t have the time/money, Firefox offers an add-on that allows you to experience the Internet as if you’re accessing it from China: http://chinachannel.fffff.at

Elena Goukassian has been a KCDC organizer since 2011. She has an MA in German and European Studies from Georgetown and now works as an arts writer, reporter, and editor.