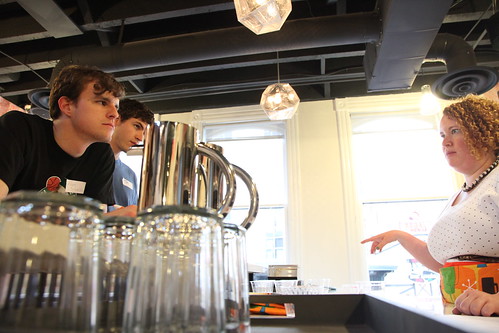 Laura Karr became interested in the history and study of whiskey as a law school student. Vowing to expand her palate and her knowledge, Laura boldly declared, “I must taste MORE!” She now strives to disprove the assumption that whiskey is a “man’s drink.”

The class began with a brief lecture about how whiskey is born: as a grain mash made of barley, rye, wheat, buckwheat, oats, quinoa, or corn. As with bread, each grain lends its own flavor profile. We sampled five types of whiskey, and learned a brief history of each. The fifth variety, made of blue corn, was certainly the most unexpected. Our favorite was the first (and the sweetest), Johnny Drum Bourbon.

Bourbon doesn’t have to be made in Kentucky to be called bourbon. To earn the name, it’s required — by law — to be made in newly charred oak barrels.

Bourbon must be made from a mash mixture that is 51 percent corn, which gives the stuff its distinct sweetness.

Whiskey doesn’t have to be aged. The class tried a straight-out-of-the-still oat whiskey, which Laura said is close to what old-timey moonshine probably tasted like. (It failed to win any votes for favorite drink of the evening). Laura assured us that there are many better-tasting unaged whiskeys.

Even craft distilleries have a pretty large output, so don’t put too much stock in the numbers on the bottle when searching for quality whiskey.

Don’t limit yourself to one brand. Scope is an important part of developing a discerning palate.

Erika Rydberg, a D.C. transplant from the northernly lands of Boston, got involved with Knowledge Commons DC after an awesome experience in a Brookline, Mass., community skillshare during her college days. By day she works at a library and by night she can be found performing poetry, listening to music, or cooking copious amounts of vegetarian food.