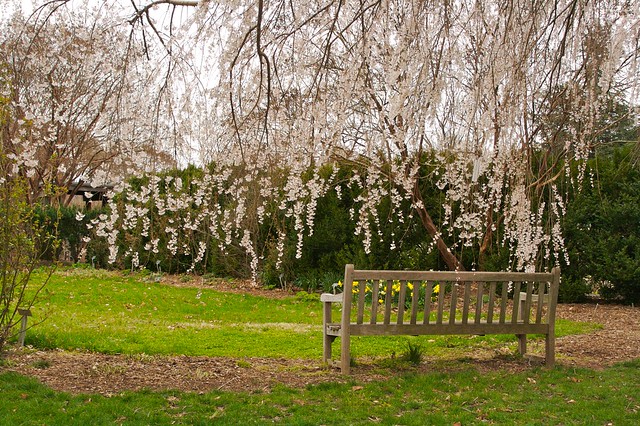 under weeping blossoms by Via Tsuji is licensed under CC BY-SA 2.0.

D.C. is riding high on cherry blossom euphoria, sparked by the yearly explosion of blooms that officially sweeps the District into spring — and tourists into the District. We’ve mapped out some quieter, tourist-free strolls where you can admire cherry trees (as well as magnolias, dogwoods, redbuds, and other beauties) without the crowds.

But first, a short history of D.C.’s famous blossoms.

The cherry trees were originally a gift from the city of Tokyo in 1912 representing the friendship between Japan and the United States — and partially an apology for accidentally sending 2,000 diseased cherry trees crawling with invasive insects two years before. The trees quickly became the pride and joy of the District’s residents, and inspired city commissioners to host a three-day celebration (the first Cherry Blossom Festival) in 1934.

At times, the treasured trees were used to make statements. In 1938, a group of women led the “Cherry Tree Rebellion” by chaining themselves to cherry trees that were to be dug up to make way for the Jefferson Memorial. The protest convinced park staff to replant the trees elsewhere on the National Mall. In 1941, an unknown perpetrator cut down four cherry trees, an act some suspected was retaliation for the Japanese attack on Pearl Harbor.

Today, thanks to the nonprofit Casey Trees, you can track down every flowering tree in the city with this handy interactive map.

Here are four routes (compiled from the map and my own knowledge) on which you can take your time enjoying spring blossoms, sans chaos.

4. Massachusetts Avenue SE, starting at Randle Circle and ending at Alabama Avenue SE: Follow the border of Fort Dupont Park for a blend of cherry, linden, magnolia, and other trees