Make DC Smile and the Power of Positivity 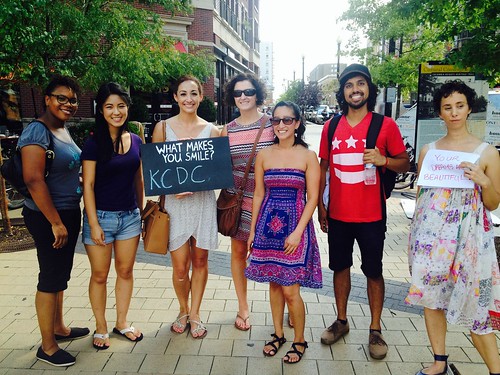 Massoud Adibpour was on a trip when he came across a dirty car with the words “Honk if you love someone” scrawled across the window. This message spurred Massoud to start spreading smiles in D.C.

Back at home, Massoud devised Make DC Smile. He teamed up with Bonnie Culpepper, and together they began their quest. Their first initiative: Holding up signs bearing positive messages for Monday-morning commuters on 14th Street.

The project grew quickly, and the team began stealthily leaving positive messages on coffee sleeves and lamp posts around the city. Two years into the project, Make DC Smile has made news worldwide, and Massoud and Bonnie continue to find new methods of inducing grins.

During Make DC Smile’s KCDC class, Massoud readied students to inspire happiness in the community. Some designed posters and coffee sleeves; others prepped to distribute water (it was a hot Saturday!). The class divided into small groups and ventured into the center of Columbia Heights for a half-hour of spreading joy. To wrap up the class, everyone reunited and discussed our experience.

For many students, it became clear that positivity has a ripple effect. Not only did we spread happiness to others, but in doing so, our spirits were lifted as well. There was a tangible positive energy in the room as we wrapped up our debrief. One student even proclaimed, “I came here a skeptic, but you’ve converted me!”