“Lots of things are expensive. Looking at trees is free,” explained Gabe Popkin, science writer and leader of our spring tree identification walk. This seemed as good a rationale as any to spend a Sunday afternoon outdoors investigating oaks and beeches.

As we began our walk in a leafy neighborhood near the southern end of Rock Creek Park, Gabe told the crowd of nature enthusiasts that trees could be identified based on several clues, including overall shape, location (near water? on a mountain?), bark patterns, and leaf patterns.

For example, the American elm has furrowed bark: 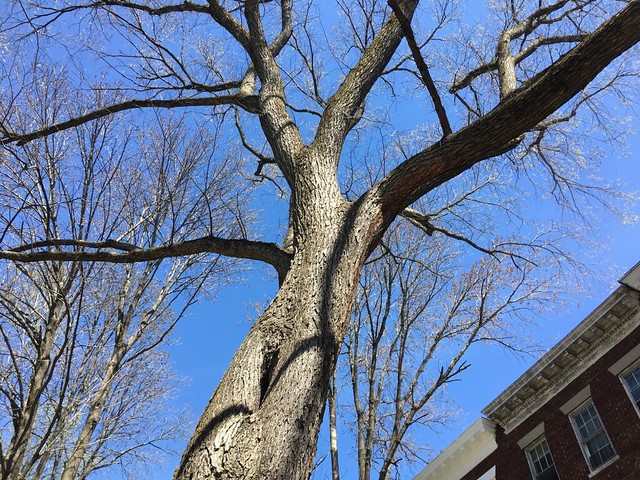 whereas the sycamore has bark that is flaky at the bottom and whitish and mottled near the top: 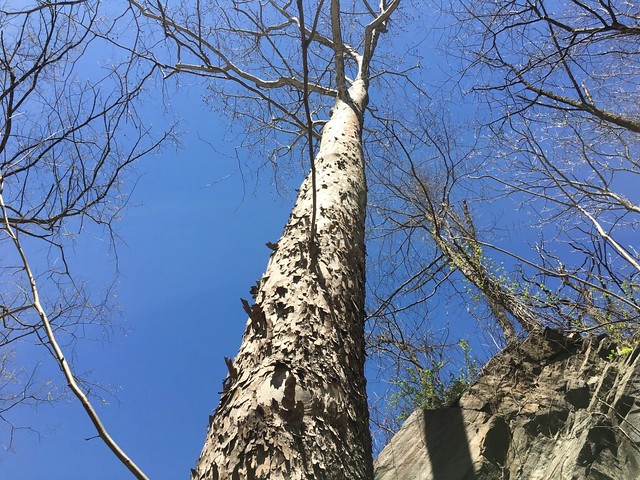 and the white oak is shaggy near the top: 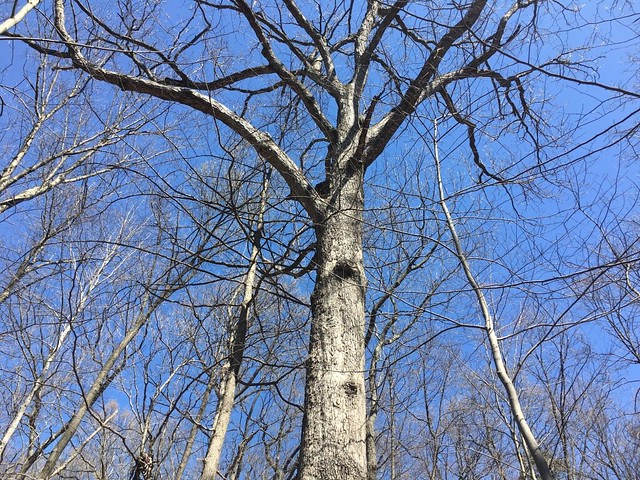 The dogwood has opposite branches that scoop up at the end: 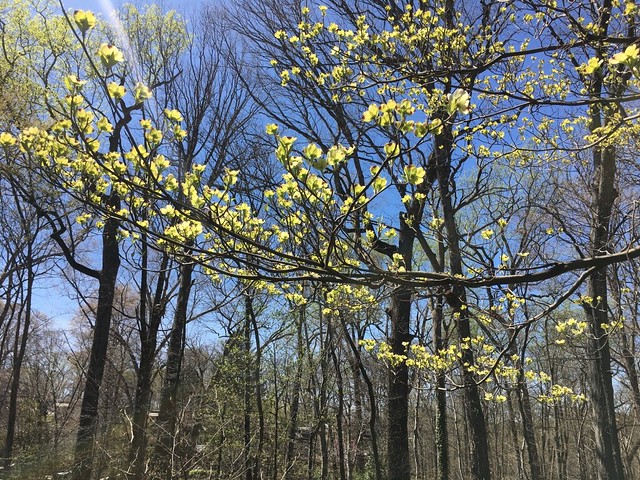 Height is another indicator of tree type. The tulip poplar, for example, is the tallest tree east of the Mississippi River: 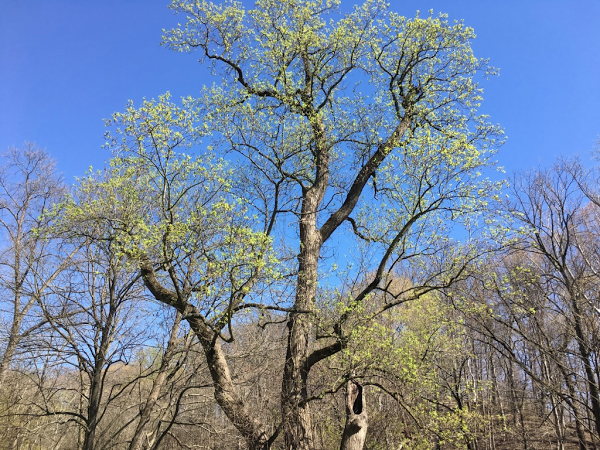 whereas the dogwood and the eastern redbud, pictured below, tend to be shorter and to grow under other trees: 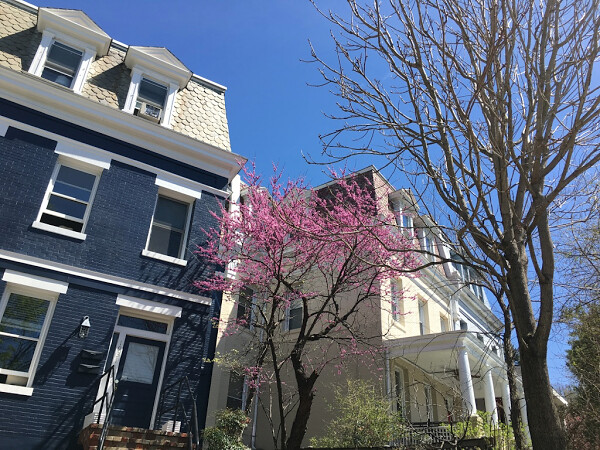 The American beech is a tree we encountered many times on our walk, and we got to know many of its characteristics and seasonal aspects. One indicator is smooth bark: 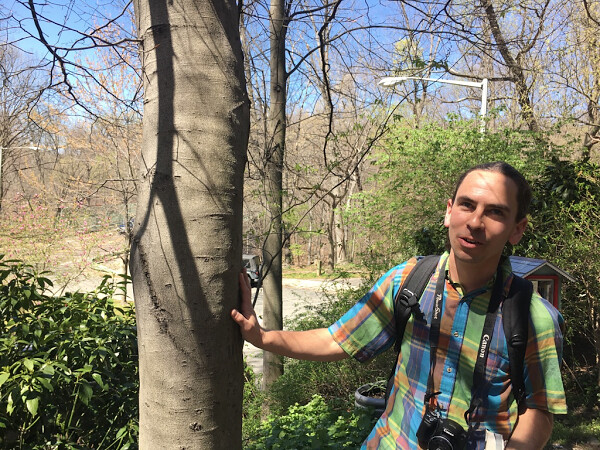 The beech starts out with sharp buds at the end of its branches that grow into pointed leaves, just developing on the tree below: 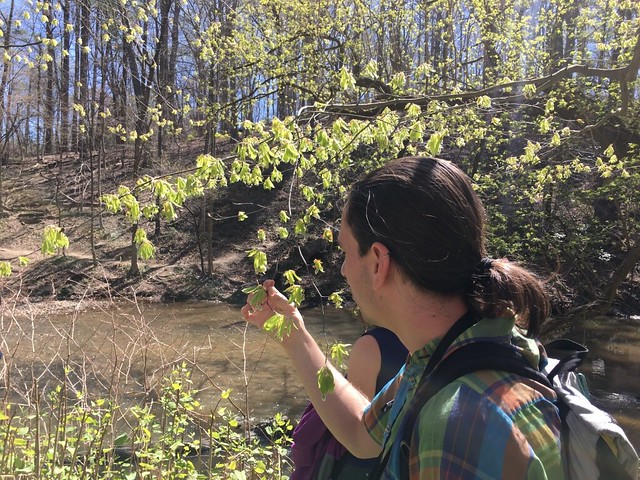 The beech also holds onto its leaves longer than any other tree. If you’re ever walking through the woods in winter and see a tree clinging to ghostly pale-brown leaves, you’ve probably found a beech. 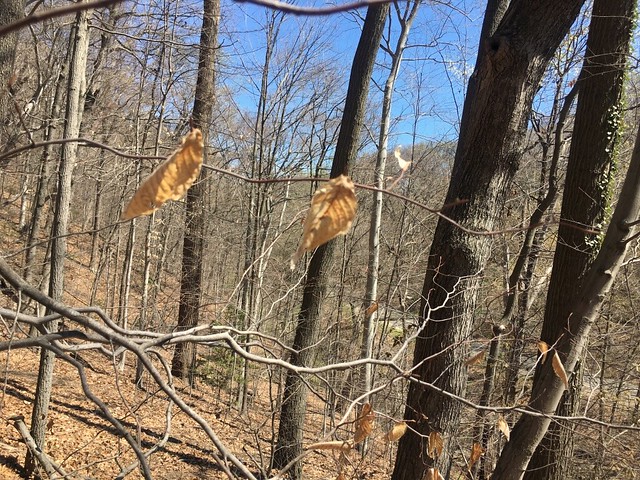 Finally, if you can find a leaf (not always possible in early spring), a tree’s leaf shape can give you clues as to the identity of the tree. The white oak has leaves with rounded ends and deep grooves: 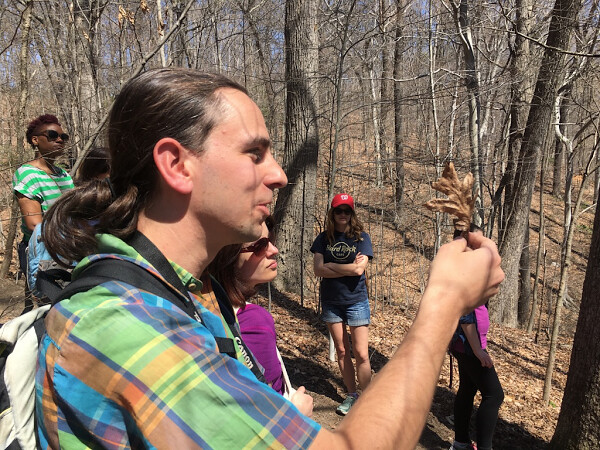 whereas the box elder (actually a kind of maple) has sharper-edged leaves that grow in threes, similar to poison ivy (but without the oil that causes the nasty rash!). 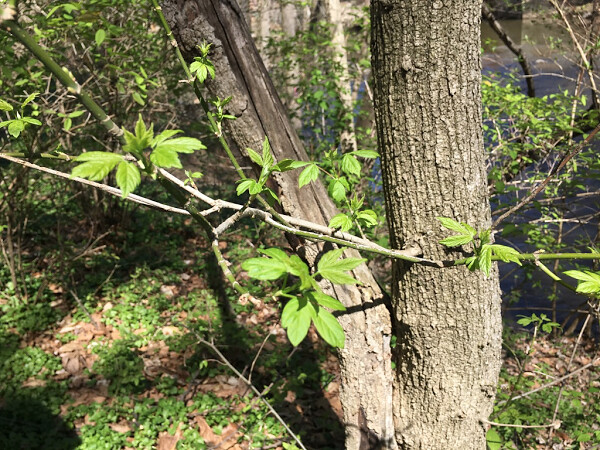 On our two-hour walk, we saw around 30 types of trees and learned some distinguishing characteristics of each. We saw trees that love water, such as silver maple and sycamore, and ornamental trees, such as holly and Japanese maple. We saw nuts, such as that of the hickory, and flowers, such as of the Kwanzan cherry. Despite the wealth of knowledge we picked up, it was obvious that this was only a tiny fraction of what there is to know. Gabe recommended the National Audubon Society Field Guide to North American Trees: Eastern Region as one good resource; there are many more, including apps, but nothing can quite compete with a guided walk on a beautiful April day.

Lauren Hauptman is a learning designer at UMUC, which means that she is no stranger to the world of education. In addition to helping faculty put together online courses, Lauren studies Appalachian dance and loves to bake. Spending two hours identifying trees in her first Knowledge Commons class has led to her apartment being filled with pinecones, leaf matter, and twigs, all to the horror of her husband.