Oftentimes video game culture can feel off-limits to those who aren’t already in the loop. This is especially true of highly competitive multiplayer games, where you stand no chance against the player who seems to have mastered some bone-crushing special move before the game even came out.

Anthony Ashford, the founder of Gaming + Social Justice, is here to help. Through his organization he harnesses the communal nature of video gaming to address social justice issues, and thus feels like the perfect person to attract new members into the community.

He did just that with a KCDC class at the Red Derby, introducing students to the basics of a longtime classic: Super Smash Bros. Anthony helped level the playing field by guiding the group through all of the game’s most important controls. Understanding the fundamentals provided new players with the confidence to take on more experienced gamers. The Derby’s cheap beer was a helpful supplement.

“I’ve found that this is a fighting game with a relatively low barrier of entry,” he told the class. “With only a little bit of instruction, people can get into it very quickly.” 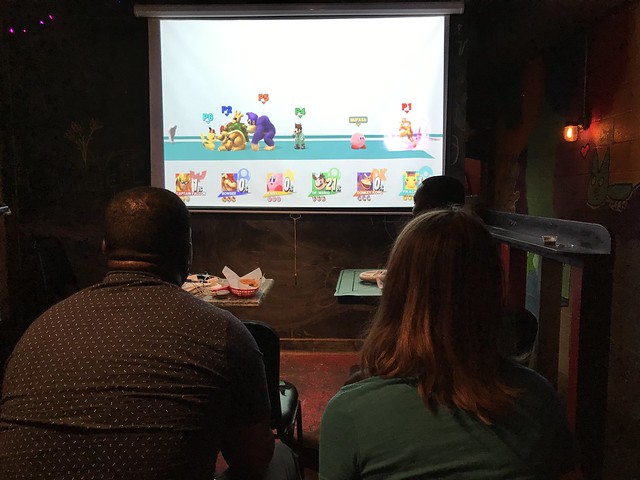 This proved itself quickly — Anthony had barely explained the basic controls before players took off in a giddy brawl among the likes of Pac-Man, Pikachu, Mario characters, and other old-time favorites. With every round of instructions, Anthony had to rein the group in to help them learn even more advanced controls that laid the foundation for an entertaining and competitive game.

In little time, Anthony showed the class how accessible video games can actually be with an open and encouraging atmosphere, an aspect that is frequently absent from the narrative of gaming.

Not even two hours later, the playing field indeed seemed to have leveled, with newer players creating stiff competition for the more experienced ones. Though Super Smash Bros. is one of the more accessible games on the market, it still bodes well for hopeful noobs that a dedicated teacher like Anthony can so easily bring more players into the fold.