Waste Not: Food Waste, Resource Conservation, and You 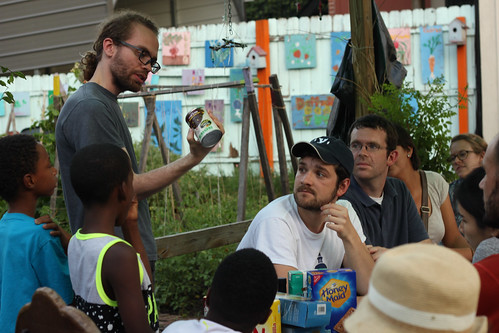 Will Reid is not your typical grocery shopper. You won’t find him regularly perusing the aisles of Giant or Food Lion, but he is a regular at one particular source — the dumpster.

In the class “Waste Not: Food Waste, Resource Conservation, and You”, Will spoke to a class of 17 KCDC students, plus three young boys who happened upon the class, at Marion Street Intergenerational Garden. The garden is run by the nonprofit City Blossoms, “dedicated to kid-driven, community engaging, creative green spaces.”

Will shared that full-service and fast-food restaurants, supermarkets, and convenience stores lose 147,478,188 pounds of food  daily. As of 2006 survey data, combined daily household food loss is at a staggering 139,264,000 pounds. Will helped dispel some myths about maintaining foods, and educated the group on the environmental impact of Americans not consuming 40 percent of their food.

“How does one go about this,” you may ask. “Dumpster diving” and “groundscoring” (finding abandoned food in the city) are two options. Will even shared the etiquette for utilizing both practices. Example: If you approach a dumpster and see someone already searching in it for food items, hands off! To start looking in someone else’s “claimed” dumpster is the equivalent of snatching and eating the food off the person’s plate.

In the last nine months, Will has spent just a little over $5 on food. He says his kitchen cabinets are always stocked: “Sometimes homeless people will knock on my door because they know I have food available and friends who come over know they can have anything they want [to eat]!”

Students talked about their experiences with composting and growing their own food. Attendees who grew up in foreign countries described their shock at the ways in which food is processed — and often times, wasted — in the U.S. All the students came and left with one goal in mind: Learn how to make better use of the food resources they have.

Samantha L. Justice splits much of her time between her amazing day job as an HR consultant for nonprofits and shooting with her favorite Canon camera in tow. She enjoys the cultural melting pot that is D.C., traveling to new destinations, and spending time with nearby friends and family.