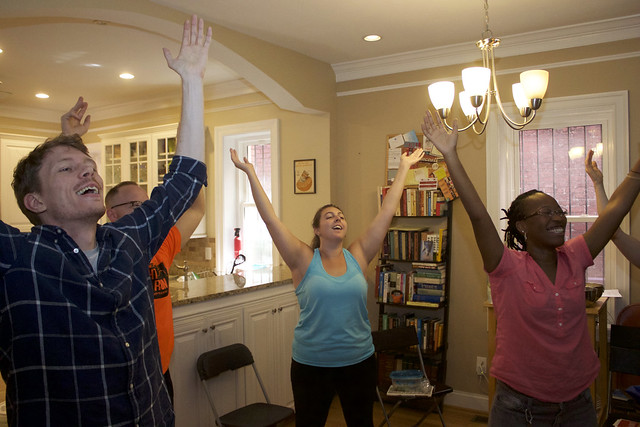 Students warm up for an afternoon of active learning. (Photo by Samantha Justice)

“We can’t leave a lid on a pot of boiling water because it will explode”: Acupuncture aims to rectify the Qi, one’s energy, in order to keep one calm and centered (and, presumably, free from figurative self-explosion).

We began “To The Point: The Basics of Acupuncture” with a few exercises: the warming of hands to feel and increase the kinetic energy between them, a focus on steady breathing, and hand movements to imagine balancing a Qi ball. Many students reported an increased state of relaxation and some felt a magnetism between their hands. According to Seth and Hannah, “it’s [all] in your head” in terms of one’s ability to direct energy or sensation in the body; the mind is powerful!

Seth also emphasized the importance of knowing one’s self and disposition. With this knowledge, an acupuncturist can better guide treatment and prescribe herbs, if necessary. Affecting the electric flow of the body via the use of extremely thin needles, acupuncture is used as a treatment for a host of health issues, such as depression, neck pain, morning sickness, and even allergies. 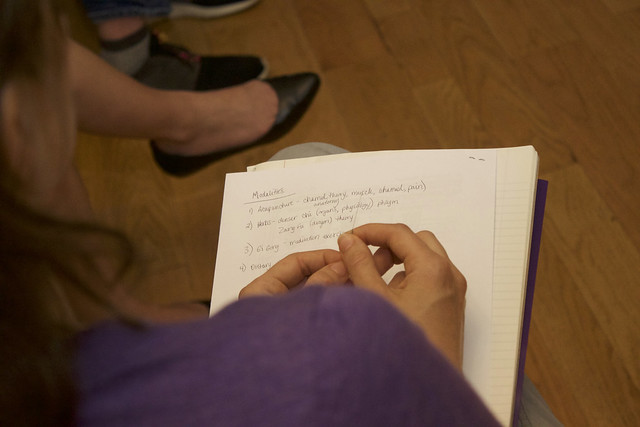 In “The Five Elements of Chinese Medicine”, we learned about the five elements of Chinese Medicine (yay for accurate course titles!) and their associated personality types: Fire for the attention-seeking type, Earth for the friendly type, Metal for the independent type, Water for the smarty-pants type, and Wood for those who like to lead. We learned about yin and yang, and associated tastes, colors, and seasons with each element. Despite these associations, however, one should move in and out of each personality type throughout their day, and such transitions are only natural for the flow of one’s Qi.

Qi doesn’t translate exactly into English, but an attempt at translating might yield “vitality of life.” There are many interesting ideas about how Qi moves; for example, a French doctor claimed he could treat the whole body by following the flow of one’s Qi.

One final thought from Seth and Hannah: “We’re not machines; our bodies know how to heal themselves. We’re self-healing organisms.”

Samantha L. Justice splits much of her time between her amazing day job as an HR consultant for nonprofits and shooting with her favorite Canon camera in tow. She enjoys the cultural melting pot that is D.C., traveling to new destinations, and spending time with nearby friends and family.