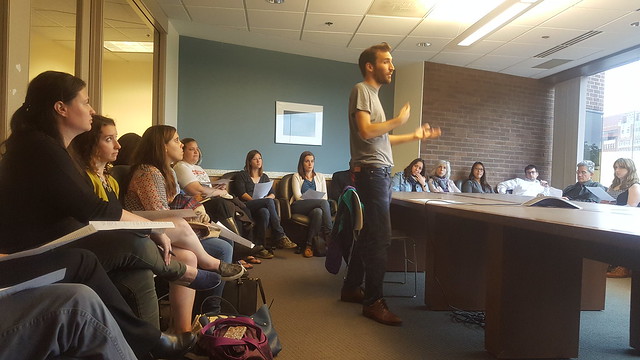 The room was brimming with attentive attendees, more than half of whom had never taken a KCDC class. After brief introductions, Alec started the class by asking students to each read a harrowing statistic:

Additional statistics showed that non-whites are much more likely to be accused, convicted, and serve longer prison sentences than white Americans for the same crimes.

Why? Why are some populations more likely to be imprisoned? If racism is at the heart of the issue, why did having our first African American president not make a difference? These questions — any many others like them — were asked by students.

The answers were often complicated, but were filled with moving stories. For example, a young mother is accused of a drug offense as a passenger in a car which contained a burned-out joint, despite no evidence that she is aware of the joint’s existence. Without bail money or a public defender, the mother is given the option of staying in jail indefinitely to wait for a court date or pleading guilty to be allowed to go home. Wanting to rejoin her four week old baby, the woman pleads guilty to an offense she did not commit, thereby losing her right to any subsequent public assistance.

Unfortunately, such stories appear to be a common experience for poor people who are ensnared by a system that incarcerates an unprecedented number of human beings. While the class left with numerous unanswered questions, Alec recommended several resources:

Alec also encouraged students to check out the following organizations:

As part of KCDC’s summer 2016 session, Alec also taught another class, Prisons, Profit, and Human Beings, to dive deeper into the structural causes of the prison-industrial complex.