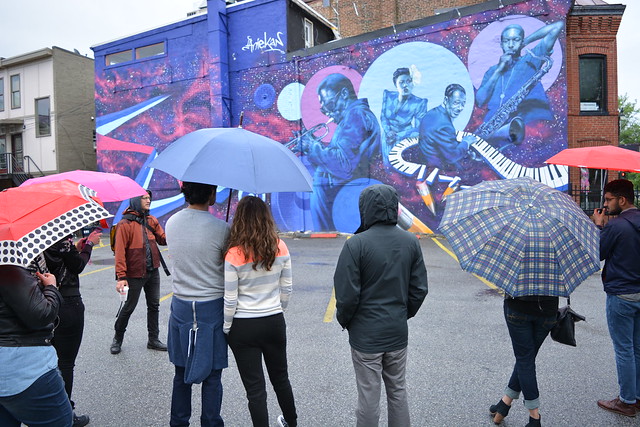 Graffiti is a conversation, and on this wet Saturday morning, I was listening. Cory L. Stowers was leading a small group of KCDC students through the streets and alleyways of Shaw. Although I had biked through this neighborhood dozens of times, I had never really noticed how much artwork was tucked into the corners. A good portion of it was created by Cory and his crew.

Cory’s been writing graffiti for 23 years. He grew up in Hyattsville and quickly started spending more time in the District, where he found others who shared his passion for paint. Like many graffiti writers, Cory practiced his art any place he could find space: underpasses, the sides of buildings, wherever. He learned to keep an eye out for property owners and police.

With the help of some solid mentorship from graffiti writers who had been at it for a while, Cory began developing his own style and learning about the people who lived in the neighborhoods where he was painting. As he forged relationships with local business owners, they started asking him to liven up their buildings with his art. 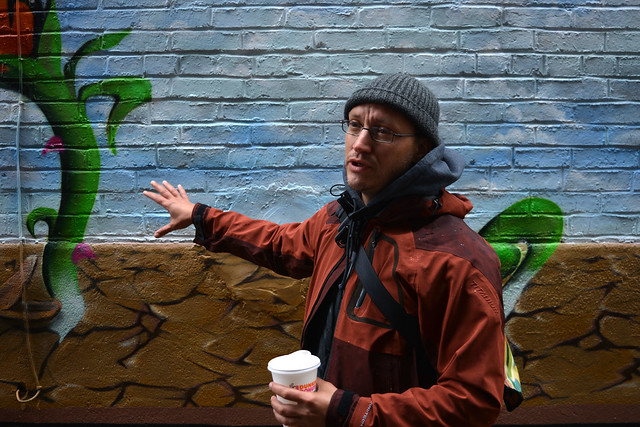 I had never heard the term “graffiti writer.” Cory informed me that a writer is, simply, someone who writes their name. This practice started in the trains of New York City. It was a rejection of the standardized, posh world of gallery art and a means of empowerment for artists who weren’t part of that culture. Or, in Cory’s words, “It’s about the pronouncement and the reinforcing of an identity they’ve chosen for themselves.”

If graffiti writing is focused on the identity of an individual, street art can speak to the identity of a group. Street artists use imagery to convey a message that, juxtaposed with the infrastructure and the people in an area, may envelop the local culture. 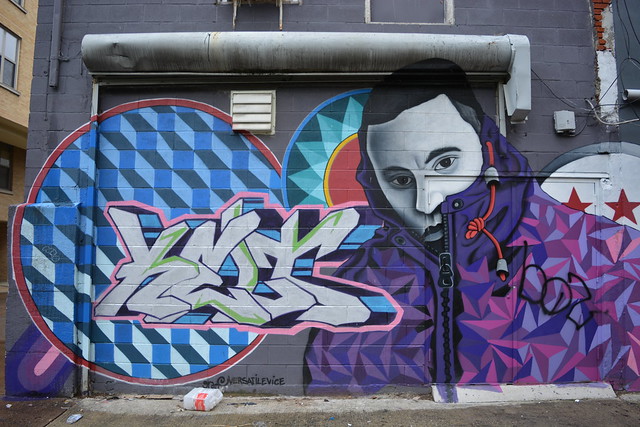 As we ventured northwest toward the U Street Corridor, Cory shed some light on the faces of those who stared back at us. We crowded around a mural of a man in a suit, setting up an old-fashioned camera that pointed in our direction. This man, Addison Scurlock, was a D.C.-based photographer in the early-mid 1900s. He started his own business and documented local culture, including weddings, baptisms, and protests. He also photographed inspirational black figures, like Duke Ellington and the singer Marian Anderson.

As the other KCDC students were snapping pictures, I felt like I was stepping in between two mirrors facing each other, a time marker in a space that reflected indefinitely into the past and future. 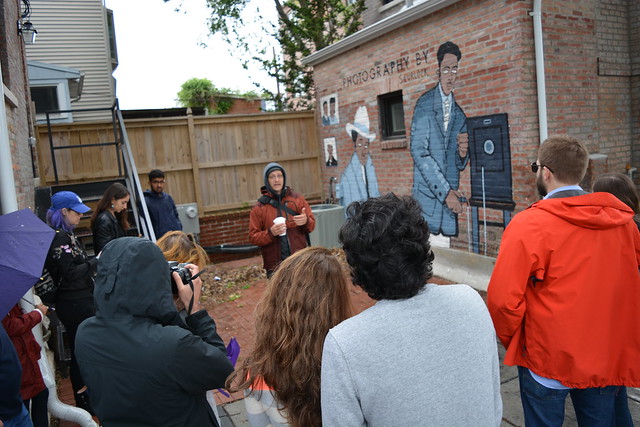 At U & 13th, just a block from Ben’s Chili Bowl, we saw Paul Robeson. Cory smiled as he guided us into the alley, basking in this larger-than-life portrait of the famed singer, actor, and activist.

The mural is a timeline of Robeson’s life that spans several decades and 25 feet. There’s an app you can download to watch videos of Robeson performing as you walk across the alley and admire mini-portraits of the entertainer. Cory told us this is the first interactive public mural in the country.

This kind of elaborate public art doesn’t come cheap. Cory worked with ART B.L.O.C, a local artist collective, to secure $50,000 in funding from the D.C. Commission on the Arts and Humanities to paint the mural. Unfortunately, though, funding for these projects can be tough to come by. 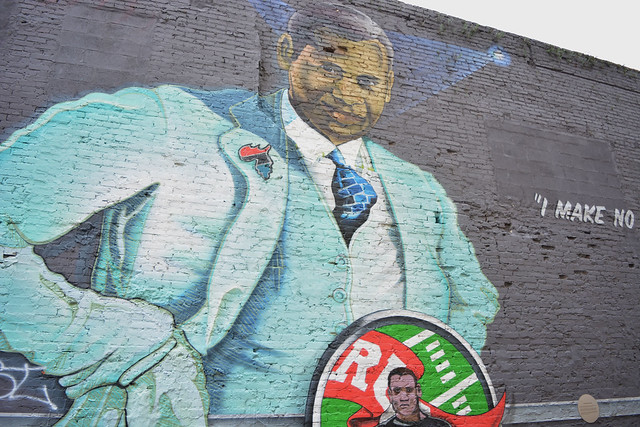 “What we do adds so much value to the community,” Cory told me. “But at this point in D.C.’s art history, they’re not as on-board with cutting larger checks for stuff like this. Possibly because they look at some of the art as disposable.”

That’s a notion local artists are trying to fight. When art is done with buy-in from the community, it tends to be respected.

We turned the corner and hit an alley with the words “Black Broadway” sprawled across the wall. Cory had painted this for the first year of Funk Parade, honoring U Street’s nickname and legacy. Although the mural was uncommissioned, it remains undisturbed, and elders in the community support it. 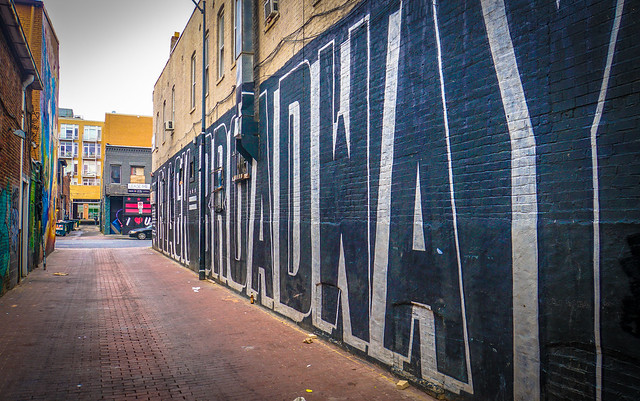 This photo by Ted Eytan was taken last year, but captures the mural as we saw it.

Many of the folks who live on U Street pass the Black Broadway mural every day. For those who are familiar with the area’s history, it’s a daily reminder of D.C.’s Black Renaissance during the height of the Jim Crow laws. For others, it sparks a curiosity that may lead to conversation and, ultimately, a deeper understanding of their neighbors.

These psychological and social effects demonstrate the possibilities that a mural can bring to a neighborhood. Similarly, they underscore the need for artists to be familiar with the community they’re working in. 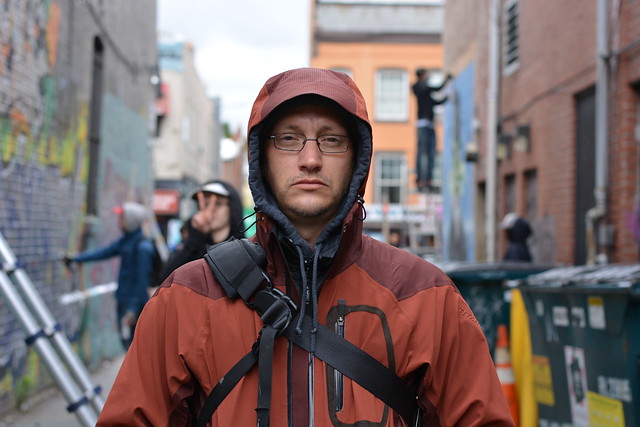 Since Cory became a father in 2008, he gave up all his illicit graffiti and has been focusing on commissioned pieces. Working with the D.C. government and local non-profits and businesses, he’s maintained a focus on inclusiveness and reinforcing cultural identity. “When you do it for the ’hood, can’t nobody be mad at you,” he said, chuckling in front of his mural.

We ended the tour in an alley where amateur graffiti writers were practicing their typography. Cory’s now a mentor to them, passing on the knowledge he learned from his predecessors. “I kind of play a bridge between the generations of graffiti,” he mused.

At some point during our walk, the rain had stopped. I could hear birds and trombones blaring down the street. Watching the young artists, I wasn’t sure if I was eavesdropping on an inchoate dialogue, or by my very presence, an active participant.

Cory’s next project is a Gogo mural in Anacostia, but it’s about $8,000 short of funding. You can support it by donating to his Kickstarter. 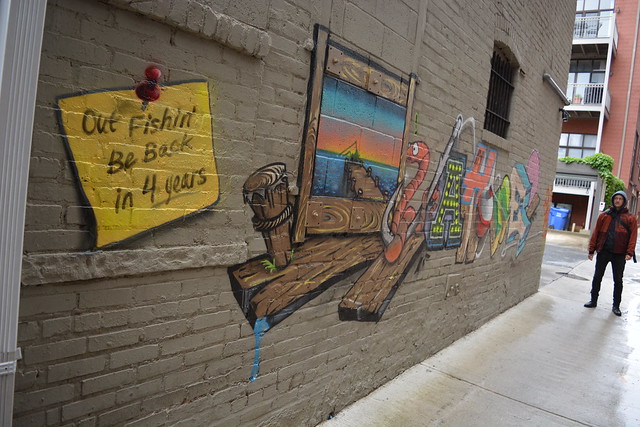 Ari Hock develops digital strategy and manages the social media channels at KaBOOM!, the national nonprofit dedicated to making sure all kids have opportunities to play. He’s led a discussion about the role of Twitter in the 2016 election at the University of Maryland, and he has at least three social media accounts with fake names.